December 1st was World Aids Day. It is an opportunity to remind people that HIV still exists and there is still much work to do on increasing awareness. Over 101,000 people in the UK are living with HIV and around 5000 are diagnosed each year. There is still considerable ignorance about how people can protect themselves and stigma and discrimination are realities.

This guest blog from Stefania Manfra is a summary of her research and poster at Baby Friendly Conference in November 2018.  Part 2 of our blogs on infant feeding and HIV, by Pamela Morrison, will summarise new guidance that was published in December 2018 for World Aids Day.

It was Spring 2018 when I decided to send the abstract of my dissertation, examining how HIV+ mothers can be supported in making an informed choice on infant feeding options, to the Unicef Baby Friendly Initiative UK with the hope to have it selected as a poster presentation to be displayed at its Annual Conference in Liverpool. How delighted I was when I received the email confirming that my abstract had been chosen!

Let’s start by saying that in the UK the infant feeding recommendation in the presence of HIV is primarily to avoid breastfeeding due to the risk of vertical transmission from mother to baby through the breastmilk (BHIVA and Children’s HIV Association (CHIVA), 2010). However, BHIVA and CHIVA (2010) also acknowledge the fact that HIV+ women who are receiving HAART (highly active antiretroviral therapy) and who have an undetectable viral load at birth, may choose to breastfeed for the first six months of the baby’s life. If they wish to do so they should be supported in their choice. In such scenarios, the recommendations are: maternal HAART treatment and short-term infant prophylaxis, exclusive breastfeeding for six months, careful monitoring of maternal HAART adherence and monthly maternal viral load testing alongside infant HIV status (BHIVA & CHIVA, 2010). These recommendations were reviewed in 2014 and retained.

Meanwhile, the updated guidelines on HIV and infant feeding from the World Health Organisation (WHO) (2016) recommend that HIV+ mothers should exclusively breastfeed their infants for the first six months and then introduce complementary food thereafter while continuing breastfeeding for at least 12 months, alongside receiving HAART and being fully supported with the adherence of the therapy, regardless of their CD4 count. This is known as Option B+ (WHO, 2013).

Below are the findings of my review. 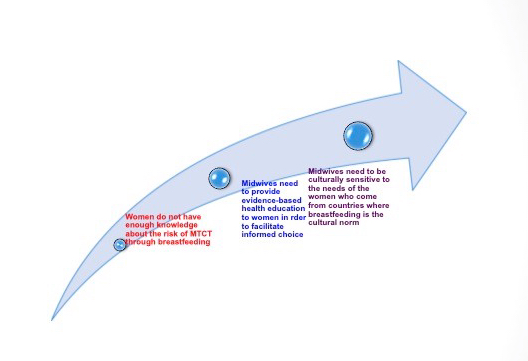 In developing countries, not breastfeeding is associated with high child morbidity and mortality, particularly related to gastrointestinal problems due to the lack of clean water and sanitation, hence making it unsafe to formula feed. On the other hand, in developed countries, where formula feeding is considered affordable, feasible, acceptable, safe and sustainable (AFASS) (WHO, 2016), bottle-feeding is the recommended choice for HIV+ women.

For that reason, in the UK, infant feeding recommendations in the presence of HIV are primarily to avoid breastfeeding, regardless of maternal viral load or antiretroviral treatment (BHIVA & CHIVA, 2010).

However, BHIVA & CHIVA (2010), also acknowledge that HIV+ women with undetectable viral load at delivery, CD4 count >350 cells and receiving HAART, may choose to breastfeed for the first six months if they wish to do so and should be supported in their choice.

Midwives should provide women living with HIV with evidence-based and unbiased information to enable informed choice and be conversant with current local, national and international guidelines on HIV and breastfeeding.

Likewise, Indicator 8 “Infant Feeding and HIV” from the World Breastfeeding Trend Initiative UK (WBTi) report (2016), found that not all healthcare professionals in the UK receive up-to-date training on this topic. In addition, the feeding method of an HIV-exposed infant does not seem to be recorded. Hence we do not have an accurate number of how many of these infants in the UK are (officially) being breastfed.

In line with the recommendations stated in the WBTi Report (2016), to increase women’s knowledge and to facilitate informed choice, healthcare professionals have a duty to educate women living with HIV on factors affecting vertical transmission and support them in their choice of infant feeding methods, through antenatal health education.

BHIVA and CHIVA (2010) Position statement on infant feeding in the UK. (reviewed and retained 2014)

World Health Organisation (WHO) (2013) Consolidated guidelines on the use of antiretroviral drugs fro treating and preventing HIV infection.

I am a newly qualified midwife, in my current Trust for the past 5 months.

I am passionate about breastfeeding and about providing evidence-based, unbiased information to women and their families to help facilitate informed choice.

I am currently embarking on specialist breastfeeding and lactation training. I am also planning to do a Master’s Degree in Advanced Midwifery Practice in the near future.