I received too much breastfeeding support – said no mother ever!

Your vibe attracts your tribe

I did not realise the power of that statement until I became a breastfeeding mother. Nursing my child became a life philosophy, a kaleidoscope lens, spinning my family, bringing like-minded people together and painting the colours of my parenting. About 3 years ago there was a story all over the media about a mother who was asked to leave a certain store because she chose to breastfeed openly in there. Breastfeeding mothers on social media were furious. Simultaneous protests in branches of that store were set up and I organised one of them. Some great friendships were born out of that movement. This simple act sparked a discussion about the needs of the breastfeeding community. This could not end there. 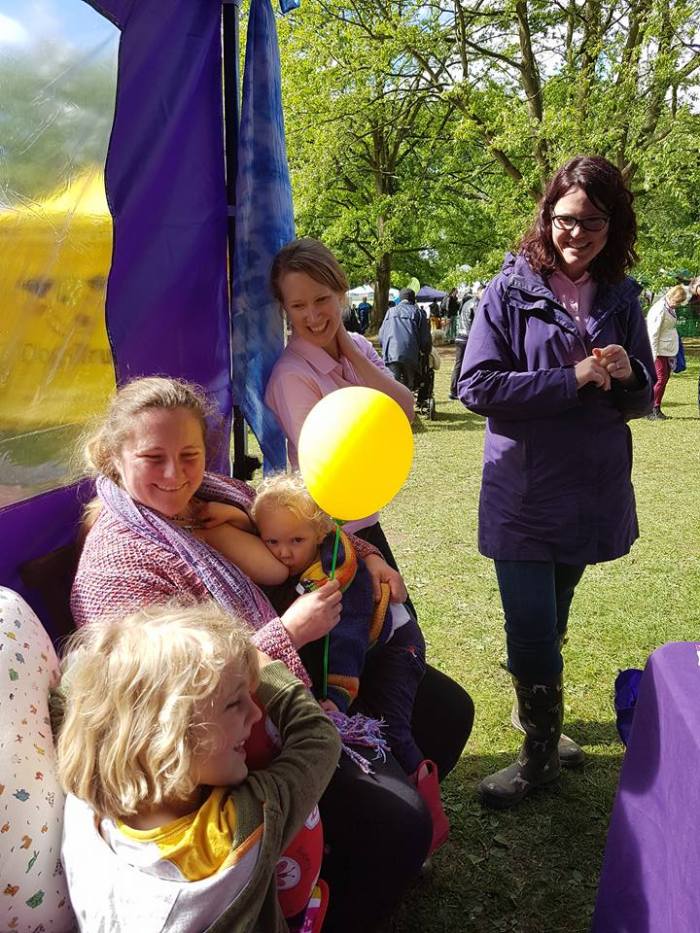 Protest was the beginning.

We wanted to make sure mothers knew their rights. We wanted to educate, empower and bring families together. Slowly a community has been born. It kicked off with a picnic to celebrate National Breastfeeding Week, followed by some meetings in a children’s centre. A year passed and having my third baby gave me a huge boost of confidence to put my peer support training into practice. After another season of outdoor gatherings, I hired a room in a community centre. One of the mothers got inspired and started another group in a nearby town, followed by more of them. All were hosted by mothers who breastfed their own babies and felt they could support others and offer a safe space for befriending.

A few months later we decided to organise peer support training. The services offered by the local health visiting team and children’s centres were not sufficient at the time. And there definitely was a niche for peer support. Having experienced first hand how unique it is having another mother support you through hardships, I fell in love with the idea. We approached other service providers using the Maternity Services Liaison Committee. At first, not many believed in us but, as time passed, we proved to be worthy of their trust. We asked for help from generous friends, who delivered the training at no charge, and we found a venue for free thanks to a children’s centre manager. But mostly we were incredibly lucky to recruit, through our groups, amazing women who agreed to offer their time to volunteer in the local hospital.

We decided it was the right time to create something more formal. West Herts Breastfeeders community came to life thanks to the many mothers who nurtured it deeply. This ‘baby’ was very lucky. It was a firstborn who had all the attention and support from local Infant Feeding teams and the Children’s Services department of Hertfordshire County Council. We came a long way. It took us just over a year to train 18 peer supporters, establish six monthly regular meetings in the West Herts area, recruit nearly 550 members to our virtual community to provide them with 24 hour support through Facebook and all that with no official funding. We are all volunteers. You could be too!

As mentioned in the Open Letter of February 2016, organised by the WBTi UK team, a woman’s ability to breastfeed is often determined by the support she receives and the environment in which she lives. While we cannot change everything, we try to help normalise breastfeeding out and about. We also play an important role in normalising feeding older babies and encouraging mothers to carry on, while often dealing with family pressures to wean or the challenges of returning to work. Most children’s centres provide breastfeeding support only in groups for babies under one year, and health visitors do not see mothers as often as they would like. Not having a healthcare professional label also changes the balance of the dialogue and helps mothers to open up.

Together we can do more

What we strive for in the face of recent cuts and challenges is the partnership between all local services. Our success is owed largely to the power of networking. We can see where we are needed most and what else can be done to make sure no woman is left alone at any stage of her nursing journey. You can help to be part of the change, by simply sharing your thoughts with your newly elected MP. Use the WBTi sample email to tell them what breastfeeding mothers need in your local area. Ask them to use their influence on the Local Authority to showcase the importance of breastfeeding to public health and safeguard their budget for health visiting and breastfeeding support.

Please sign up HERE to receive email updates on our WBTi work!

One thought on “The amazing story of West Herts Breastfeeders”